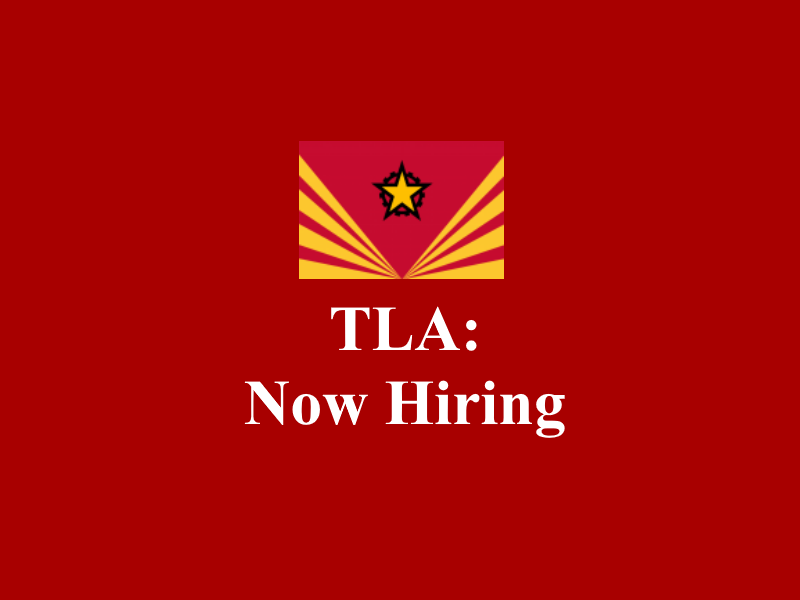 Three In a Week: Ministerial Resignation and Controversy in The Leftist Assembly

The Leftist Assembly (TLA) is one of NationStates’ largest left-wing regions, typically boasting between 200 and 250 nations. This has been in large part due to successful recruitment campaigns carried out by the Minister of Recruitment (often referred to as the MoR), a post created 12 months ago when the region sat at just 115 nations. As per the region’s laws, a Minister will be appointed directly by the Secretary, the Head of Government,  if the candidate already serves in the General Assembly (TLA’s elected legislature, composed of 5 Senators, the Prime Minister and the Secretary), or nominated by the Secretary and confirmed by the General Assembly when the Secretary’s chosen candidate does not serve in the General Assembly. However, in the space of just 7 days, TLA has seen 3 people serve as the Minister of Recruitment, including a term that lasted less than 24 hours for a nation that appears to have been appointed to the post by mistake. To further complicate matters, the sudden resignation of the Minister of Media has left the region’s newspaper, The Red Star, in the lurch, with proposals to abolish the post that maintains it having been proposed in response to its sudden vacation.

Argentigrad was TLA’s 4th Minister of Recruitment, appointed by currently-serving Secretary New Arkados after the December 2018 elections, to fill a position which had previously been held by Prime Minister Nottinhaps. Argentigrad, having held the post for just under 2 weeks, the shortest tenure of any Minister of Recruitment up until that point, delivered a statement on TLA’s RMB to confirm his resignation, citing technical difficulties that would make it impossible for him to begin his work. Argentigrad would go on to thank New Arkados for giving him the opportunity to serve in the role, and Nottinhaps for teaching him how to carry it out. At the time, veteran Assemblian and Founder, Cedoria, would publicly comment that the resignation “means we can expect to see a new MoR soon”. What would follow, however, was not expected.

Radio silence would follow for several days from Secretary New Arkados, with no announcement being made on a new Minister of Recruitment for 4 days. On January 5th, Senator Dawtania would confirm that the General Assembly, TLA’s elected legislature, had not discussed Argentigrad’s replacement since the day before his public resignation. New Arkados would finally comment on the issue on the 6th, apologising for his inactivity and announcing that Prime Minister Nottinhaps would be taking over as Acting Secretary for 3 days, as New Arkados dealt with unspecified IRL happenings. New Arkados would, however, state that he would announce the new Minister of Recruitment “tomorrow barring some bad circumstances; otherwise I give Nott [Nottinhaps] the right to do so”.

On the morning of January 7th, Secretary New Arkados would announce the appointment of Senator Grod Island to the post of Minister of Recruitment, amidst a continued decline in population that had by then exceeded 2 weeks.

NSToday can exclusively reveal that, according to a user close to the situation, New Arkados did not check whether or not Grod Island had the necessary facilities to carry out their role, nor did Grod Island explain that he lacked said facilities until after his appointment to his new role. This error in communications would only serve to turn the situation from a slow ministerial appointment to a political controversy, something rarely seen in TLA’s generally uncontroversial political workings.

This, however, would not spell the end to the region’s Ministerial woes that day as, that afternoon, the Minister of Media (MoM), Libertasnia, came under fire as there was no visible sign that a new edition of The Red Star (TLA’s government-run publication, maintained by the Minister of Media) was going to be published before the legal deadline of 28 days. Libertasnia would soon take to the RMB, lashing out at claims that his tenure lacked effort by stating that he was unable to produce The Red Star as there were no high-quality submissions coming in, and that he wasn’t willing “to publish something that isn’t held to a standard of at least coherency”. Libertasnia would go on to resign from the position of Minister of Media, and leave TLA to join The Internationale.

With the loss of the Minister of Media, the future of The Red Star now appears to be in doubt. Suggestions of abolishing the paper or reforming it as a less academic publication have been made since Libertasnia’s resignation, and two proposals that would abolish the position of Minister of Media entirely have been co-signed by two Senators, and are expected to be discussed and voted on in the near future. Whatever happens, this is unlikely to be the end of the story.

Kavagrad has been present in NS on-and-off under various names since 2012, and has resided in The Leftist Assembly since late 2017. He has previously served there as Secretary, Minister of Recruitment, and Speaker of the General Assembly. He currently serves as a Member of the General Assembly and, outside of regional politics, is the President of the Interregional Left Football Association (ILFA).