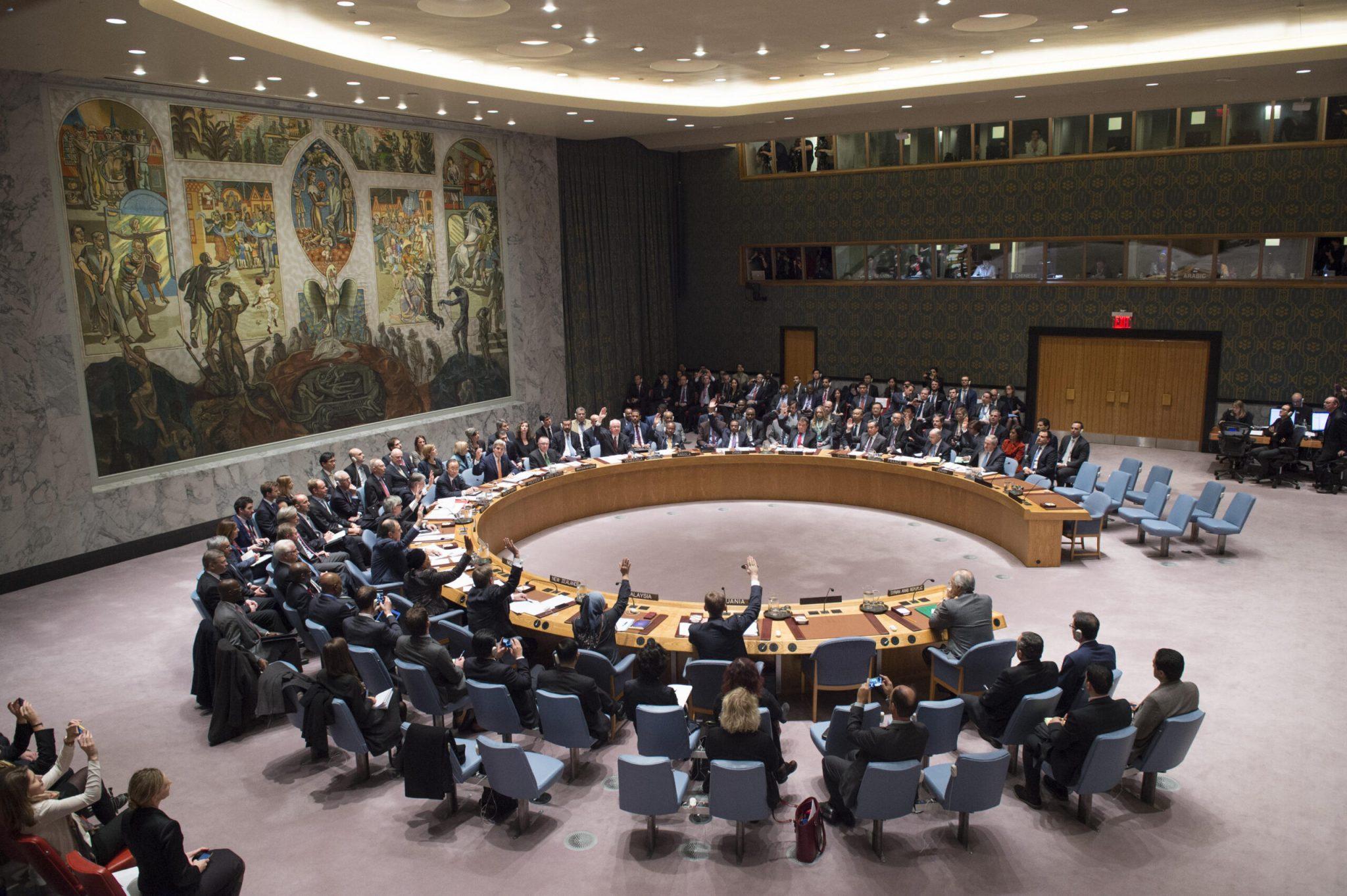 Three decades ago, the Kingdom of Macabea and the Ordenite Fourth Reich, two right-wing and authoritarian states, seemed destined to an enduring friendship. Things have changed almost 180 degrees since then. Today, former allies stand radically opposed to each other and locked into on-again and off-again conflict that has cost the lives of hundreds of millions and has come to define central Greater Dienstad. This transformation has come with a paradigmatic shift in ideology and the role of ideology in conflict. One became more authoritarian, the other a protector of liberty. How and why did this geopolitical polarization happen? Five words: the World Assembly Security Council.

As the Kingdom of Macabea transitioned into the Second Empire of the Golden Throne at the dawn of the 21st century, Greater Dienstad saw the rise of a new power in its infancy. Staunchly opposed to communism, under the leadership of its first emperor, Jonak I, the Golden Throne quickly went on to found the Right Wing Collective (RWC) with another nation, Holy Panooly. The RWC would go on to become one of the most powerful international treaty organizations of its day, rivaling NATO, established by Automagfreek. It would come to include the Ordenite Reich. How, then, did two former allies fall out and come to lead to different, and diametrically opposed, camps?

When Jonak died a decade after founding the empire, the throne was bequeathed to his grandson, who ascended as Fedor I. A controversial transfer of power was marred by civil conflict, an invasion, and a war that would come to involve almost all of the then-powers of Greater Dienstad and many from beyond. This was the War of Golden Succession. Since Fedor’s successful defense of his crown, his rule has been distinguished by an almost complete change in the empire’s foreign policy. Today, the Golden Throne is seen as a champion of pluralism, local democracy, and liberty. In a very real sense, the empire has radicalized ideologically. This path has not been linear, however, and neither has it been predetermined.

Despite anti-communism and the RWC, ideology has played relatively little role in Greater Dienstadi politics and conflicts. Certainly, the War of Golden Succession was not fought on ideological grounds. Safehaven and the Holy Empire of Stevid were not opposed to the Golden Throne on the basis of political and economic organization or belief. Rather, war in Greater Dienstad has always been defined moreso by the contextual particulars of interstate diplomacy. Stevid joined the War of Golden Succession in support of Safehaven’s invasion of the Golden Throne because the Golden Throne was allied to Guffingford, which was then in a conflict with Stevid over oil rights in the sea between them. Years later, the Great Dienstadi War unfolded in a very similar way and few ideological linkages existed between allies. Rather, it was the web of interstate alliances that defined the sides in the conflict.

Of course, the two powers who today set the pace for interstate politics in central Greater Dienstad were not involved in the Great Dienstadi War. The Fourth Reich was just a rising power then. The Golden Throne was licking its wounds and more focused on consolidating its new post-War of Golden Succession acquisitions in Safehaven and Theohuanacu. Perhaps it has been the resurgence of these two states and their growing rivalry that have acted as gravity wells and pulled the rest of the region into a brewing cold war that often turns hot.

It is certainly true that the Reich is ideologically defined, given its long-standing politics of national socialism. The problem with this narrative, however, is that prior to recent years, the Golden Throne’s foreign policy has not been ideologically driven, and therefore the key ingredient to ideological polarization, the existence of a diametrically opposite ideology, did not exist. Indeed, as the Great Dienstadi War wound to a close, it seemed more likely that a rivalry would come into being between Lyras and the Golden Throne, rather than the Golden Throne and the Ordenite Reich.

An important series of events occurred in the years following the Great Dienstadi War that polarized the politics of central Greater Dienstad:

What is most interesting is that the Security Council did not just engrave or reinforce a paradigm already in existence. The commendation of the Golden Throne most certainly accelerated, and perhaps even catalyzed, a change in both its foreign policy and its policy toward annexed territories. Although the Golden Throne has always operated under a veil of moral goodness by claiming to annex as a means of imposing order, peace, and law on failed states, its military operations in conquered territories have not always been clean in the same moral sense. It was only recently that it fell subject to international criticism as a result of its heavy-handed approach to counterinsurgency in Indras. But the commendation brought international attention, which the empire leveraged to ethically elevate it above its enemies, and therefore give its conflicts the edge of being moral crusades against evil. It is unsurprising, then, that the Golden Throne has in many ways rapidly “cleaned up its act.”

In other words, the Security Council’s commendation gave impetus to a radical shift in what the Imperial Bureaucracy of the Golden Throne deemed to be acceptable in terms of its application of violence. Recorded crimes against civilian populations have dramatically dropped since the commendation, and the Golden Throne has further solidified this change by creating a military force specifically trained for pacification missions — where its focus has changed from suppression of insurgent forces to the creation of better political infrastructure. The empire has also attempted to further solidify its image as a beacon of freedom by funding programs like Proyekt Liberty, a satellite constellation that aims to provide free, uncensored internet access to the entire region and, eventually, the world.

If the commendation was not awarded to a state that perfectly encapsulated what the Security Council deems to be “goodness,” it certainly worked to confine the Golden Throne into an ideological straightjacket that has forced it into severe self-regulation. The brand that the Security Council has helped to enshrine is one that the empire now seeks to protect at all costs, even at that of revisiting some of its own questionable policies.

The condemnation of the Ordenite Reich is an extension of this newfound “Security Council politics,” which is evident enough by the fact that the resolution was introduced by the Golden Throne itself. Interestingly, the Golden Throne has never been a permanent member of the World Assembly and, in fact, its only stint in the organization came during the condemnation period. The condemnation text is itself entirely moralistic, citing human rights abuses, adherence to an ideology of national socialism, and war crimes committed by the Ordenite Reich. Unsurprisingly, skeptics have wondered whether the condemnation was pushed for propaganda purposes, thus allowing the Golden Throne to take on the mantle of ideological purity while branding the Ordenites as evil. Of course, to many, the Reich is evil and it certainly commits evil everywhere it goes, but under the umbrella of its fight against evil the Golden Throne has justified its fullscale annexation of Holy Panooly and the incorporation of much of western Krasnova into the imperial federation as “free cities.”

Thus, the Security Council has catalyzed the imposition of a rivalry confined and legitimized by ideology. What stands out about this geopolitical transformation is how robust the ideologies have become. In Greater Dienstad, alliances change with the wind, but the Security Council commendation and condemnation have imposed a new order that in many ways comes down to liberty against fascism. The diplomatic re-alignment amongst nations to this new paradigm has been sharp and quick.

Furthermore, the Security Council has forced very tangible changes in policies, especially from the state it commended. A less heavy-handed approach to occupation is one clear development, but it’s also true that since its commendation the Golden Throne has championed the development of highly autonomous local democracies in its acquisitions. Whether out of its good nature or as a means to maintain its newfound brand, this policy of fomenting local democracy has introduced the institutions of popular rule into nations that have either never seen them before or had suffered from a long period of local political chaos that favored the development of dictatorships.

A conflict between two ideologies, given institutionalized meaning and importance through their celebration and condemnation by the Security Council, that began in Holy Panooly and Indras has since expanded. Ordenite intervention in Nicaro was met by the country’s occupation by the Golden Throne and its entry into the imperial federation as an allied vassal state. Likewise, the rivalry has dragged the Killian Republic, once the foremost democracy in Greater Dienstad, into the war between the two — much of its south has already been occupied by the Reich’s military forces and the north has been placed under the dictatorship of a general favorable to the Golden Throne. Robust, the new ideological divide is, indeed. Even as the two states agree to a ceasefire to end their latest spat in Krasnova and the Killian Republic, the stage is set for another future war that promises to be just as or even more violent than the ones that came before.

While the Greater Dienstadi experience is not a comment on whether the Security Council ought to commend or condemn, based on the fact that these can be used propagandistically or to give legitimacy, it is a comment on the Security Council’s power to give long-lasting shape to inter-state relations. We have seen how a commendation and a condemnation worked with other forces and trends in Greater Dienstadi politics to enshrine a new geopolitical paradigm that has polarized politics in the region. To see this fully in action one can transcend the rivalry between the Golden Throne and the Ordenite Fourth Reich to include within the transformation, for example, the rivalry between the Golden Throne and the slave-trading Ralkovian Empire, as well as the Ralkovian Empire’s invasion and partition by Eitoan, Holy Marsh, and other allies forming a “coalition of good” loosely aligned with the Golden Throne. No less, the commendation of the Golden Throne legitimized it in a way beyond its rivalry with the Ordenites, leading to the forming even of the controversial idea of a Pax Macabeanus across the region — an image of regional stability in line with the ideology of “goodness” versus the destabilizing force of “evil.”

Because the Golden Throne is likely to remain a great Dienstadi power for the foreseeable future, and because its actions are in large part constrained and defined by its new moral mission, the Security Council’s decisions are likely to continue influencing Greater Dienstadi inter-state politics in a way that solidifies the new geopolitical paradigm. Indeed, the institutionalization of its conflict with the Ordenites, and its opposition of the Ralkovian Empire and the support of its invasion, has led to the establishment of an alliance, known as the Triumvirate, between former enemies: Imbrinium, Stevid, and the Golden Throne, in addition to Arcaenia. What greater testament to the influence of the Security Council than this?